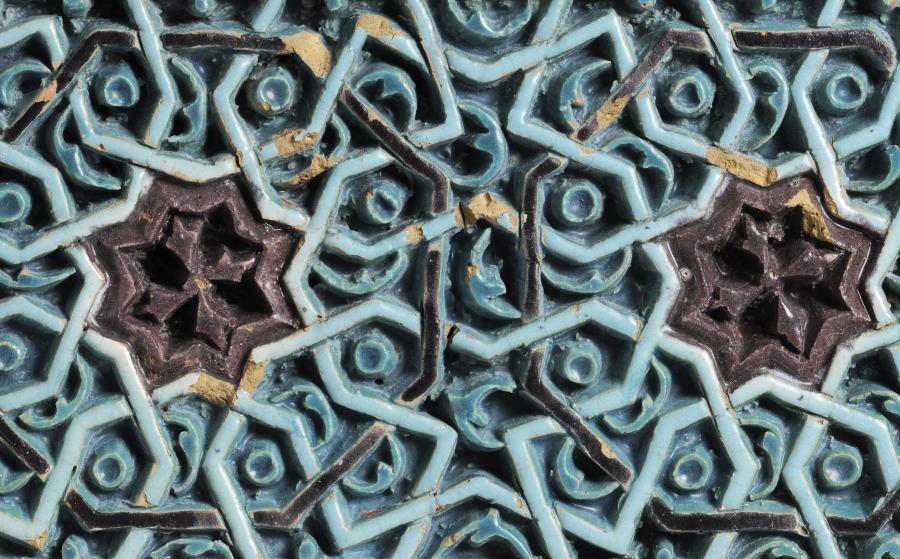 This tile of a decorative architectural frieze belongs to a collection of Timurid ceramics, which was probably brought back from the great expeditions to Central Asia at the end of the 19th century. It was one of these missions that led Charles-Eugène Ujfalvy (1842-1904) to Bukhara and Samarkand, where he collected a number of fragments, most notably from the Timurid Shah-i Zinda ("living king') necropolis on the Afrasiyab hill. From approximately 1350 to 1420, leading figures in Timur's entourage chose to be buried here, in the vicinity of the tomb of one of the prophet's companions.

The Timurid dynasty is famed for its grand architecture: the collection held today at Lyon's museum of Fine Arts includes honeycomb-shaped architectural elements called muqarnas, numerous fragments of friezes, decoration, capitals and columns, as well as part of a roof ridge adorned with the heads of strange animals. These pieces are distinguished by their moulded design, finished in a turquoise glaze. This fragment shows the incredibly complex geometric design created by the ceramicist, which demonstrates the importance of this type of ornamentation in Islamic art.