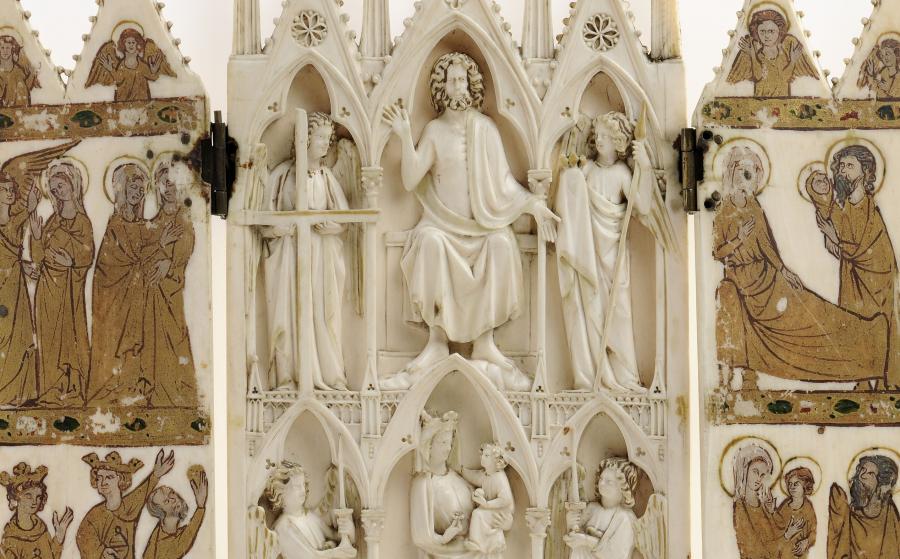 The central part of this triptych, which dates from the end of the 13th century, represents Christ in judgment showing his stigmata, seated on a throne between two angels carrying the instruments of the Passion. On the lower part, two angels with chandeliers stand on each side of a Virgin with Child. The particularly refined style of this ivory piece is characterized by the elongation of the bodies, the fineness of the faces and the architectural frame made up of delicate arched moldings. This exceptional piece has been attributed to the workshop of the Master of the Soissons Diptych, which was active in the north of France and was one of the first large workshops of the Gothic period.

This triptych presents the particularity of associating the central panel to two ivory shutters covered with “flat painting”. These gold-painted leaves represent two scenes at two different moments. On the left are the Annunciation and the Visit of the Three Kings; on the right are the Nativity and the Presentation at the Temple. An outline surrounds the shapes and clarifies the drawing. On each leaf, three bands delimiting the illustrations are set with precious stones, a reminder that the most cherished ivories were often decorated by goldsmiths. These easily portable works were designed for private devotions.