Votive cone with a dedication by Gudea 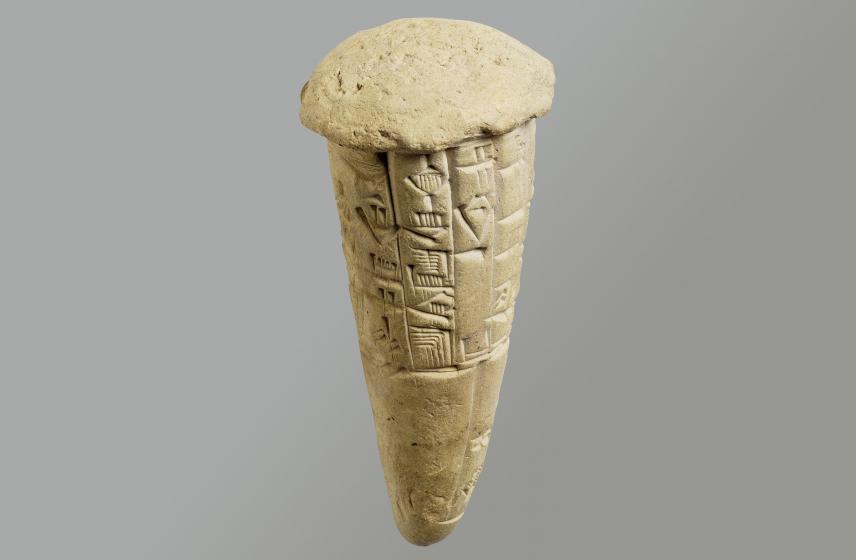 In approximately 2120 A.D., Gudea, Prince of the 2nd Sumerian Dynasty of Lagash, set out to build a temple to Ningirsu, the national deity, in the capital Girsu (now known as Tello ). As was the custom, commemorative documents were buried in the foundations or underneath the doorways, or built into the walls. Most were cones or clay nails driven into the walls, with the heads exposed.

This votive cone bears the sovereign's dedication to the deity, written in cuneiform characters: "Gudea, Prince of Lagash, has performed all that is seemly for Ningirsu, the strong hero of Enlil, his Lord, and has built and restored his E-Ninnu, the bright storm bird." The text attests to the construction and states the name of the Prince who built the temple, for the gods and for future generations.

Ningirsu is associated with his father Enlil, supreme deity of the Sumerian pantheon, and the epithet "bright storm bird" used to describe the E-Ninnu temple is a reference to his original form as a god of storms. These items were also designed to guarantee the purity of the foundations and to protect against subterranean demons, as the great temple of Lagash provided a cosmic connection between the heavens and the earth.